DIVINE HEALING THROUGH THE ANOINTED SIMILITUDES.(BLESSING OMOLE AN ANATOMIST AND MOTHER MRS DORCAS OMOLE A NURSE) 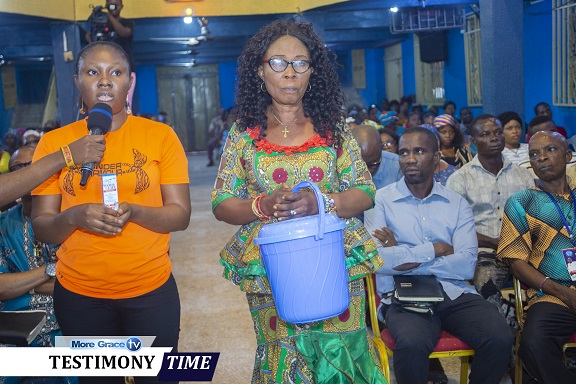 More grace everybody. I am here to testify to the glory of God upon my life.
When I was in school, ( AMBROSE ALLI UNIVERSITY EKPOMA) one day i came back from church and my entire body became cold. I told those around me that they should take me to the hospital as I felt very uneasy. They said i should calm down and relax. I started running around and they ran after me and they took me to the hospital. When i got to the hospital the doctor said nothing was wrong with me that it was just anxiety that i am dehydrating that there is no water in my system. I was admitted and placed on drip. After sometime, i was discharged and i went home. I noticed the more i was taking in drips the more i was urinating. I called my mother and told her about what the issue was all about. Then she said i should come to Benin.
When i got to Benin, i went straight to the UNIVERSITY OF BENIN TEACHING HOSPITAL ( UBTH) they admitted me and they did test on my sugar level. Were I was admitted, the doctor found out from the medical test conducted on me,lt showed I had high sugar level. I began to urinate quite often I had to pass the information to my family at home. I was urinating frequently, and i was always fainting.
One day, the doctor in charge of my case prescribed a certain drugs meant for the treatment of high sugar in the urine and I couldn’t get same to buy either in Nigeria or outside the country . I started taking drugs for blood pressure.
After three days, the doctor came to me and said they have done all they can that there is nothing they can do to help the situation. The next day, my mother came to the hospital and told them to discharge me that she is taking me to PRAYER LINE.
After some days, i was opportune to be at the PRAYER LINE SESSION where the man of God Senior Prophet P.I.A Obaski prayed for me and administered the WATER OF LIFE on me and life came into me immediately. After that day, i regained my self. I became strengthened, the frequent urinating stopped and my appetite for food was restored. I wrote my exams without the assistance of anyone. To the glory of God i am a graduate.
This bucket with my mother was what they use to measure my urine. When i was in the hospital, anytime i was taken for test they use wheelchair to carry me around. I was told the sickness doesn’t have a cure that i should get a drug that cost #90000 to manage the sickness.
MRS DORCAS OMOLE. ( MOTHER).
Before all this that happened to my daughter, during one of our Wednesday FAITH CLINIC SERVICE , the man of God Senior Prophet P.I.A Obaseki made an altar call that there is someone here that masquerade pursue in the dream. I came out amongst others. When i was coming out, the man of God said i should bring all my family pictures that what he was seeing was not Good. I went back and brought all the pictures and he prayed for all the pictures.
After one week, my son in Abuja called me that i should come to Abuja that one of his daughter poured hot water on her body. I went to Abuja with all my ANOINTED SIMILITUDE. I called Senior Prophet P.I.A Obaseki and i told him what was happening he said ” more grace don’t be afraid she will be ok”. He said i should use the ANOINTED SIMILITUDE on her. When i got there, i did as instructed by the man of God.
After two weeks my granddaughter was fully ok to the glory of God.
Then i had a call from my second son again that he has been rushed to the hospital they admitted him,then i told him not to be afraid,and i put a call to the man of God PROPHET P.I.A OBASEKI,and he instructed me to continue using the anointing materials which i did.
To the glory of God my son was healed.
Immediately after that while i was with my daughter when she was writing her exam my husband called me and said i should come down to benin that he is not felling too well,i also ministered the anointing materials on him and he was healed.
THANK YOU JESUS.